Almost a decade ago, a busy, historic harbour in the seaside village of Portpatrick in Dumfries & Galloway was facing a very uncertain future.  The village’s livelihood depended on the pleasure craft that the harbour attracted but, in 2007, a plan by its private owners to build a modern marina on the site was rejected by the local authority as being wholly inappropriate for the architecturally listed harbour and the village itself. 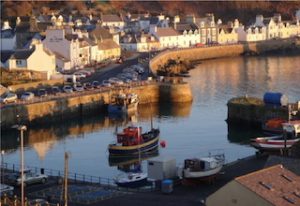 Local people got together and decided to form a trust with the aim of buying the harbour for the community and making improvements that would secure its “integrity and appearance” but would be modern enough to satisfy 21st century boat owners.

But it wasn’t until 2012 that the Trust reached an agreement with the owners to buy the harbour for £350,000 (three hundred and fifty thousand), the finance coming from a local wind farm and a loan of £125,000 (one hundred and twenty-five thousand) from the owners themselves, to be repaid by 2015.

Fast forward to the end of 2014 and the realisation that, despite efforts to raise funds from grants and other sources, it seemed that the Trust would not be able to pay back its loan by the deadline.

At that point, Trust member Calum Currie (an offshore oil technician born and raised in Portpatrick) suggested they might be able to raise the money by selling shares in the harbour through CSS – the Community Shares Scotland scheme funded by the Big Lottery Scotland and the Carnegie UK Trust.

Locals, former residents, visitors, tourists and boat owners were so keen on the idea that, in the space of just three weeks, they’d bought enough shares to save the harbour which is now run by the Portpatrick Harbour Community Benefit Society and is being geared up for its first summer in community ownership.

Said Calum Currie, now chair of the Portpatrick Harbour Community Benefit Society: “Few investors buy community shares to make money but the Society must make sure the harbour is running at a profit so that shareholders can get their money back if they want it.”

He added: “We couldn’t have bought the harbour without the fantastic support and guidance provided by Community Shares Scotland, Cooperatives UK, Social Investment Scotland and Third Sector Dumfries & Galloway.” 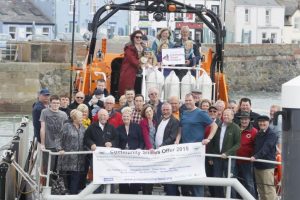 And as Kelly McIntrye, Programme Director from Community Shares Scotland so beautifully sums up “People want to see good things happen in other communities. It makes them believe that good things can happen in theirs.”

If you feel that this article has inspired you and you would like to hear more, learn more and read our top tips, then we’d love to keep in touch.  Why not sign up to receive our newsletter today.