It’s no surprise that award-winning designer Wayne Hemingway has given a big “thumbs-up” to what Can Do Places stands for.  For the company that he and his wife founded back in 1995 has been responsible for, among other projects, the regeneration of the town centre of Blackburn where the designer was brought up. 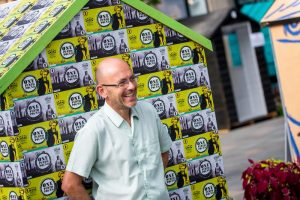 Born in Lancashire in 1961, just as Britain was becoming emerging as the epicentre of the music and fashion worlds, Wayne moved to London in the late ‘70s to study town planning and geography.

The story goes that he and his girlfriend Gerardine (they’ve been together now for over 35 years) needed money to pay the rent and decided to flog their stylish spare clothes – his were second hand, hers were home made – at Camden Lock market. Over the course of a single weekend, and having paid just £6 for their stall, the couple made £300. And the rest, as they say, is history.

Within a year they had 16 stalls running at the market and went on to set up the highly successful fashion design business, Red or Dead which, as Wayne points out, “might never have happened if we hadn’t been broke.”

After selling Red or Dead in 1995 (they had a branch in Buchanan Street in Glasgow), Wayne and Gerardine founded “Hemingway Design” which describes itself as a company specialising in “affordable and social design.”

His admission that they “do work really hard” is something of an understatement, for the company has been responsible for a huge variety of design projects including new build housing and the regeneration of the town centre in Blackburn where Wayne was brought up.

“Place is really important” he says. “When we’re asked to design housing, we do nothing until we’ve met with the people who are going to be living there, to get inside their heads and discover what they want.

“If a person helps to create the place they’re going to live in, they can take ownership of it. That helps to create places that people like, care about and want to look after.” 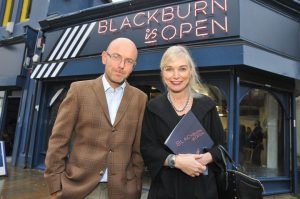 The community-led “Blackburn is Open” scheme is one that certainly fits with the Can Do Places ethos as it aims to “revitalise Blackburn’s independent retail in the town centre, boost its economy and reinstate the town’s once thriving creative spirit.”

The initiative includes discounted retail space for designer-makers and craftspeople, a temporary cinema and a programme of festivals, markets and other events.

Interviewed about the “Blackburn is Open” scheme, Wayne stated: “We all need to work together to make and keep town centres at the heart of the community experience. A vibrant town centre is the heartbeat of a town, a place where its community gathers for human interaction, discourse, work, rest and play.”

If you feel that this Podcast has been of use and you would like to hear more, learn more and read our top tips, then we’d love to keep in touch.  Why not sign up to receive our newsletter today.