Forty-three senior pupils (well – 42, not including the elusive David) are assembled in the spanking-new auditorium of the Royal Scottish National Orchestra (RSNO) in Glasgow. They’ve come from all over the country and are about to embark on the RSNO Takeover, a work experience programme that will see them organise and put on a concert IN JUST TWO DAYS! 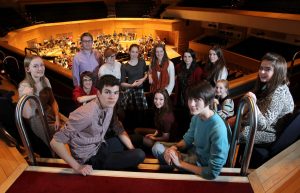 Not only do these 16-18 year olds have to plan literally every minute of the hour-long show, half of them have elected to play in the orchestra . . . in front of, not just family and friends, but actual paying members of the public.

Strictly speaking, some of the Takeover students have been involved in a bit of advance preparation. Jennifer (from Biggar), Gina (Aberdeen) and Megan (Fife) are in charge of Artistic Planning which means they had to choose the music for the concert, something they discussed and decided on (picking from a long list of possibles) via Skype, a few weeks previously.

“We had no idea how important Artistic Planning was” they say “but we’re loving the responsibility!” (“The buck definitely stops at Artistic Planning” says Emma Hunter who, along with Christine Walker, is in charge of the Takeover programme.)

The rest of the students are grouped together in the RSNO’s other departments: Presentations & Operations, Learning & Engagement, Marketing & Development. 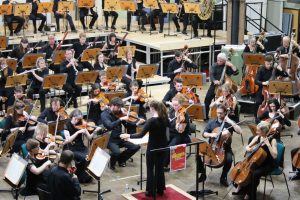 They’ve been told what the departments they have “taken over” are responsible for – everything from deciding what images will go on the big screen in the auditorium (some of which they’ll have to film), to writing the notes for executive producer Manus Carey’s “thank you” speech. And while they can call on RSNO staff members for guidance, the Takeover students (who have no school teachers with them to hold their hands) have to come up with their own ideas and carry them through.

Meanwhile, the 20 or so students who put themselves forward to perform at the concert are also hard at work, practising with RSNO musicians who will be playing alongside them on the night. (Most, if not all, the Takeover participants have been making music for years and will have had experience of youth orchestra concerts.)

Among them are Nicola (flute, Edinburgh) and Patrishka (violin, Glasgow) both of whom are determined to make performing a career. “There is no Plan B!” they insist, adding: “It’s been amazing working with professionals and getting an insight into what’s involved in being a full-time musician. They are living our dream.” (Patrishka will go on to bag the prestigious role of leader of the 1st violin section in the akeover concert.) 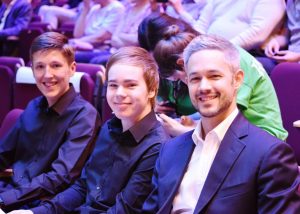 Students Calvin and Michael have taken on the, frankly, extremely scary task of conducting part of the concert and are getting a crash course from the RSNO’s associate conductor, Jean-Claude Picard. Calvin (16, Ardrossan, piano, violin, RSNO Young Ambassador) reveals that he has no experience of conducting but looks, nonetheless, remarkably confident. Jean-Claude tells them:

“Posture is very important for a conductor. You want to have a “presence” in front of the orchestra.”

Although the RSNO describes the Takeover (launched as an annual event in 2014) as a “work experience initiative”, the young people taking part this year say it’s much more than that.

“We’ve done other work experience” they say “and what’s different about the Takeover is that it gives you a goal to aim for and a realistic exposure to the world of work plus a big confidence boost.

“It’s been good working in a team and then getting together at Ops Meetings (“Ops” stands for Operations – obvs!) to give a progress report to the other teams.”

With show time nearing, Rebecca (16, clarinet, voice) says: “I really feel like I’ve accomplished something here. And what I’ve learned in the Marketing & Development department is going to be especially useful for a project I’m involved in back home.” (She’s planning to produce, direct and appear in a production of “The Rocky Horror Picture Show”.) 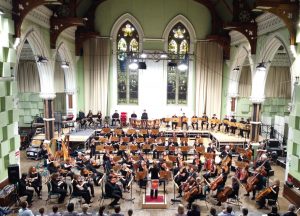 It turns out that Rebecca isn’t the only student on the Takeover programme involved in music activities outside of school time. Sarah, for instance (Peebles, trumpet) who is part of the Learning & Engagement team, will be spending a gap year working in local community music groups Breaking Sound Barriers and The Big Noise. Nicola (hoping to study at the Conservatoire in Glasgow) volunteers with Music in Hospitals and a music project for severely disabled children. And Chris (Dunblane, bassoon) who’s off to uni in September to study graphic design (“There aren’t a lot of jobs for bassoonists” he points out) already produces most of the posters and publicity material for concerts at Dunblane Cathedral.

Back at Artistic Planning, Megan reveals that she’s become better at speaking up at meetings, and getting her point of view across “without being rude.”

She says: “I grew a backbone yesterday. In the Ops Meeting, one of the other groups said they wanted a time lapse video on the big screen and we had to say: “Sorry – we’re not going to do that.” But we explained why and they understood. I was too nice to say “no” before.”

And the mystery of David’s whereabouts was solved. Magaluf, apparently.

For information on the RSNO Takeover 2018 visit the RSNO website at: