Gorgie – Bringing local freelancers and the creative community together!

Can Do Places has pitched up in Gorgie, a vibrant, well-defined area of the west side of the capital. Gorgie’s industrial past lends itself to the traditional high street which still remains and thrives today. Football fans will, of course, know Gorgie as the home of Hearts football club. Our hosts, Carol Clarkson and Kate Southern say “We feel there’s so much more to Gorgie life than football. The high street in Gorgie (Gorgie Road) is fabulous, with lots of diverse independent shops and businesses!’

Carol attended our Can Do Places event in Crieff earlier this year, where she spoke about the newly launched Gorgie Creative Network, aimed at bringing local freelancers and the creative community together in Gorgie. 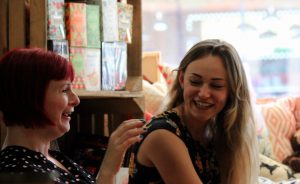 A few months down the line, we’re meeting up with Carol and Kate in the lovely cafe section of Sunshine Yoga (one of the area’s newer businesses) which features, not just tables, chairs and comfy sofas, but a tiny cot for the owners’ new baby.

Carol has worked in community development for 12 years (having had a previous career in textiles retail) and says her time spent living in the Oatlands area of Glasgow, whose residents underwent upheaval during a major regeneration programme, gave her a real sense of the importance of community. Recalling her first job after her career change, Carol says she arrived in Toryglen in Glasgow and, on discovering that the community hall was coming up to a significant anniversary, she thought ‘what a great excuse for some celebrations’. This led to two celebratory events and a series of activities for the community throughout the year. 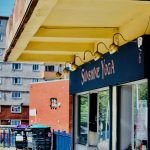 Kate (who studied Festival and Event Management with Entrepreneurship at Napier) admits she hadn’t engaged much with her local community before she returned from travelling with her partner.

She says: “I’d had a couple of jobs in event management before I went away and when I got back, I realised I didn’t want to pursue that career; it wasn’t as creative as I expected and I wanted to work in an area I had more passion for. I have always been entrepreneurial, even as a child and with my love for arts and crafts, White Rabbit Stationery was born. I’m now self employed and running my business from home, in Gorgie!’

Kate explains: “When you’re working on your own, it can be very isolating, so when I heard about a local community organisation (Gorgie Collective) delivering free arts events in the Gorgie area, I decided to volunteer.”  It was here that Kate and Carol met.

Their chance meeting at Gorgie Collective led to conversations about the similarities in their self employed lifestyles and the need to connect with other local creative freelancers. ‘We both agreed that we would love to work from a creative local base and set about researching local demand’ says Carol. ‘After receiving 70 survey responses from an eclectic mix of freelancers living in the area, among them poets, artists and business owners, it was clear that Gorgie Creative Network was what we were all looking for’. Not many months later, their joint venture was launched. Gorgie Creative Network aims to support and nurture connection and collaboration in the area through informal monthly networking sessions.

They say: “We had a great launch party at the Hearts Football Club Museum and have already held two of our monthly afternoon networking events; the first at our local Costa, the second at Gorgie City Farm (a long-established community venture).

“The community has been so supportive and holding the networking sessions at different venues means people get to experience places in Gorgie they might not have been to before.’

Says Carol: “Only two meetings in, people are already connecting and starting to share their ideas and projects. We plan to add talks, workshops and co-working, based on what people want or can offer.’

Carol and Kate tell us their plans

The long term aim is to find a permanent, collaborative working space for the Network, which we already know there is demand for. Kate explains ‘We’ve already had discussions with our members about the need for studio, workshop and hot desking space and how to meet the practical needs of makers and visual artists, as well as those who simply need a desktop office. Our members are looking for more than just a physical space. Many of them have told us how pleased they are to be a part of this burgeoning network, and how excited they are to see this community develop. We are keen to drive forward this enthusiasm, along with the collaborations already beginning to form, to provide a platform for all that Gorgie has to offer.’

For further info on the Gorgie Creative Network, visit their Facebook page at: https://en-gb.facebook.com/GorgieCreative/